Warning: Declaration of HeadwayTabsPBlockOptions::modify_arguments($args) should be compatible with HeadwayVisualEditorPanelAPI::modify_arguments($args = false) in /home/yourgr7/public_html/wp-content/plugins/headway-tabsplus/tp_block_options.php on line 896
 John Mackey Interview – Co-Founder & Co-CEO Whole Foods Market, Inc
Get FREE ACCESS to my video course "How To Make a Man Feel Crazy About You (in 90 Days or Less)"

About a month ago, I went to hear a speech by my friend Suzi Sosa who heads the Dell Social Innovation Challenge. The presentation took place at studio 6A in the University of Texas. For those of you who don’t know this, St. 6A is the old home of the Austin City Limits TV Series. It’s hard to describe the energy of this place where Roy Orbison, Steve Ray Vaughan, Elvis Costello, Willie Nelson, Bonnie Rait and so many other giants have given some of the best and most intimate performances of their careers.

I arrived about an hour earlier and it wasn’t long before John, who’s also friends with Suzi, arrived. With a long time to wait before the presentation started, I had an opportunity to speak with him for a good 45 minutes (along with my twin brother and our mutual friend Roy Spence), who arrived shortly thereafter.

I found John to be very genuine and humble and because he’s someone I’ve admired for a long time and had been wanting to meet, I asked him to be part of my show. At the end of the presentation, John very generously agreed and today I’m sharing the result of our collaboration. John shared many pieces of wisdom during our conversation that I think you’ll not only find invaluable but also quite actionable in your own personal life and as a framework to approach your business more consciously.

It’s with great humility and joy that I share with you my interview with the man who arguably has been the most influential person in the world in getting all of us to eat and live more organically. Enjoy!

During our interview, he shared: 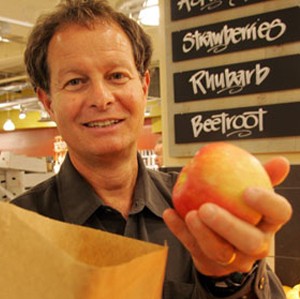 John Mackey, co-founder and co-CEO of Whole Foods Market, has taken the natural and organic grocer from a single store in Austin, Texas in 1978, to an $11.7 billion Fortune 300 company and a top U.S. supermarket with more than 347 stores and 73,000 Team Members in three countries. In 1981, Austin’s worst flood in history almost bankrupted the original store, and community efforts to save it shaped Mackey’s leadership philosophy to “do right by your stakeholders and they’ll do right by you.”

While devoting his entire career to providing shoppers with high quality natural and organic foods, Mackey has also focused on building a more conscious way of doing business. He led the company through 19 acquisitions and took the company public in 1992. The company has the highest stock market valuation of any dedicated U.S. food retailer and plans to grow to 1,000 stores.

For 15 consecutive years, FORTUNE magazine has included Whole Foods Market on its “100 Best Companies to Work For” list. The company was named “America’s Healthiest Grocery Store” by Health Magazine, one of the nation’s “Top 25 Green Energy Leaders” by Scientific American one of the “World’s Most Ethical Companies” by the Ethisphere Institute. FORTUNE magazine also named Whole Foods the #1 Most Admired Food and Drug Store Company in the World in 2012.

Mackey has been the visionary for many successful programs at the core of Whole Foods Market. He created the Whole Planet Foundation in 2005 to help end poverty in developing nations. The foundation has helped more than 200,000 poor entrepreneurs in 50 countries. Thanks to Mackey, Whole Foods Market was the first national grocer to set and implement standards for humane farm animal treatment for the meat products it sells. In 2007, he launched the Local Producer Loan Program to help local farmers and food producers expand their businesses and committed $10 million per year to help grow their businesses through low-interest loans.

Most recently, Mackey has focused on returning to the company’s roots around healthy eating and lifestyle choices. A staunch advocate of healthy eating education, he laid the foundation for health and wellness programs for team members and customers.

In 2003, he was named Ernst & Young’s Entrepreneur of the Year Overall Winner for the United States and Bon Appétit magazine’s “Tastemaker of the Year”. Vanity Fair called him “Best Provider” in its “Best of the Best in 2004,” Institutional Investor magazine rated him second on its “Best CEOs in America” list in 2005, and Barron’s put him on their “World’s Best CEOs” list in 2006. In 2008, he received an honorary Doctorate from Bentley College. And, in 2011, MarketWatch called him CEO of the Year and FORTUNE magazine called him “Businessperson of the Year.” In 2012, Esquire magazine named him one of the “Most Inspiring CEOs” and FORTUNE named him one of the “12 Greatest Entrepreneurs of Our Time.”

A strong believer in free market principles, Mackey co-founded the Conscious Capitalism Movement to challenge business leaders to rethink why their organizations exist and to acknowledge their important roles in creating value for all of their stakeholders in the interdependent global marketplace. This new business paradigm holds the potential for enhancing corporate performance while also advancing the quality of life for billions of people. He recently co-authored a book entitled Conscious Capitalism, Liberating the Heroic Spirit of Business (Harvard Business Review Press 2013) to boldly defend and re-imagine capitalism while encouraging others to implement this way of doing business that is grounded in ethical consciousness.

Out of his respect for equity among Team Members, Mackey implemented a salary cap for all executives. He cut his own salary to $1 annually in 2006, and forgoes stock options and bonuses. He continues to work for Whole Foods Market out of a passion to see the business realize the potential for deeper purpose, for the joy of leading a great company, and to answer the call to service he feels in his heart.

On His blog: John Mackey’s Blog

I’d like to give a very special thanks to Suzi Sosa and Kate Lowery without whom this interview would not have been possible.

*** If You haven’t signed up already, <<CLICK HERE>> To Sign Up For Free To My New Video Series: Meaningful Influence ***